I returned home ,tired and sore from preparing a concrete job at a local Primary School and sought solace in a cold brown bottle, and was not disappointed , the temperature was around 90 degrees in Christian measurements [stole that from Mick Hemmings Norton notes ]"I waited patiently " until it was my turn ,at the computer and was surprised to note 303 hits on my blog . The mind jumps to the famous line from Breaker Morant " We found them and we shot them under rule 303 " and in the light of the circumstances decided to post again .What I needed to tell of on the blog was Sundays disaster ,somwhat akin to Morants , Hell bent on a ride despite Vic Roads tardy postage of my red plates , I geared up filled out the log book and rode to the highway and returned ,the Domi was running like a dog .I then stripped the carbi and cleaned the plugs ,that did the trick ,running much better now I shot out the drive and stalled the motor giving way to a local on my right at the bitumen . One kick and I'm off ,yes the motor fires clutch in ,up on the right toe and out with the clutch and off ? yes ! but, with a nasty crunch . As Jules says " long story short " the bike made it down to the rail crossing and back to the shed I pulled the box out and stripped it and found the smallest gear on the mainshaft normally has 13 teeth but mine only had 12 the broken tooth fell into the 29 tooth KS gear and fractured the gearbox case from one of the studs back about two inches. 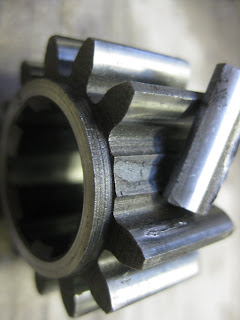 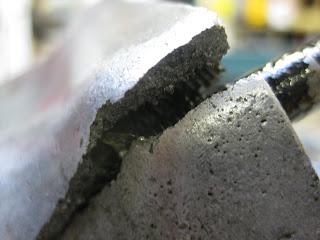 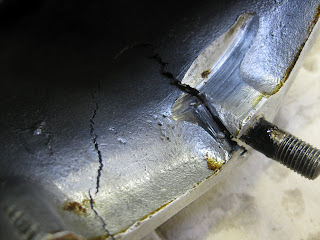 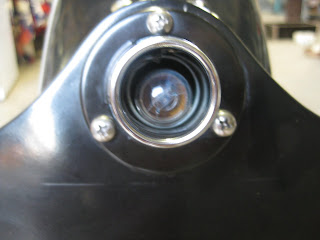 .During the 39-45 war they needed to fly aircraft over the bombsite to assess the effectiveness of the damage, this was not neccessary in my case. The upshot of it all, is not as bad as appears, the case can be welded up easily or I can use a spare I have and I will borrow the MS pinion from ES2 [Peter]to pay Domi[Paul] ,but just sometimes when the frustrations and disappointments almost knock you down ,It's a good time to find a cold beer and share the story with kindred spirits on the Blog .
Posted by Steve Kelly at 23:59 3 comments: 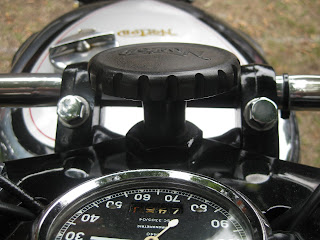 Saturday morning dilemma ,will I take the Domi to the show or will I have a quick look and get home to the shed and swap that front tube etc etc and go for a ride [ the first legal one ], what to do ? . I decided to take the bike to the show for the general public's gratification , so I caught up with most of the local" old bike fraterity" and we grouped in a corner surrounded by a sea of Harley Davidsons .The bikes included ,a Ural ,two R60 leading link BMW's a early Sunbeam single, two 1000cc HRD's ,two Commando's a rigid long stroke A7,a SA Goldie ,B33 ,A10 a very early Triumph two beautiful rigid model 18 Ajays a rigid ES2 [early Roadholders and early motor]and Les took in his Godin powered race outfit ,which attracted a lot of attention when fired up ! .Unfortunately I had some camera trouble and only took some close ups .
Posted by Steve Kelly at 11:49 No comments:

As I see things, the British motorcycle industry was running along nicely through the good times between the wars ,various company's produced V twins for speed, status or for dragging a sidecar along, and a range of singles from around 250 cc to 633 cc . The single's were built in side valve ,over head valve and over head camshaft format and a few small two strokes were on offer too .
You could get a big single to do whatever you wanted , small for economy , big SV for a chair , SOHC 490 for sport or a DOHC 490 for race [ if you need to set records in a outfit you could order a 596 OHC ].Just about all the company's made a single and they had tried all the gimmics and wierd stuff to improve the perfomance but there would be few real discoveries in technology after the end of the 39/45 war .AJS are generally credited with producing the first really sucessful OHV motor in the early 1920,s and Norton's single and double OHC motors were holding off the opposition on the race track perhaps by rider skill and reliability but they maintained the ascendancy won the races ,sold the bikes , paid the shareholders .
The big question is why did norton then go and design a parallel twin motor ???

Business mentality dictates that you need to be first in with the new ideas and be able to identify a winner early [ ask Kodak about digital camera's ], Well that sure wasn't Norton because Triumph had built a great little 500 parallel twin motor and bolted it into a rigid / girder fork frame in 1937, eleven years prior to the Norton twin hitting the market.
Norton was playing follow the leader on this one , around this time a small group of designers were working on projects for their bosses these men would be offered a better position with the opposition and would sometimes leave only to go back later . I think a designer could be briefed to work on a specific part of a machine and therby contribute to the design but in a minor way , another designer being given the credits greater part.

The blokes I want to write about are Ted Turner , Val Page and Bert Hopwood ,if these names don't mean anything to you they should ,here's why, these three designers appear to have all worked for Ariel at some stage both Turner and Page have worked for Triumph But only Hopwood had worked for Norton .I think this is how it goes, Turner does the design work for the OHC square 4 Ariel and hands over to Page, but prior to leaving he basically cut the motor in half and ran it as an experiment while at Ariel, he then moves to Triumph .Once at Triumph he Remembers the half of a SQ4 motor and how well it ran . From this came all the lovely Triumph derivative's ,Turner is without doubt the patriach of the Speed Twin , Tiger, T Bird ,Bonneville and so forth ,"on you Ted " he seems to have stayed a while and is credited with Triumph's success because of his styling input mouth organ tank badges chrome strips seats and stuff .Turner then moved upstairs and took on management roles it would appear he was good at everything !
Val Page completed the work on the SQ 4 and had done lots with their singles, once again sales rose after a styling lift involving the high level exhausts ,that Ariel red paint and judicious use of chrome the one I like is called a Red Hunter VH I think ?
Bert Hopwood had been employed as a draughtsman with Ariel and Triumph and had been under the direction of both Page and Turner at some time and would have been in the centre of the development work on probably the Triumph and the Ariel twin motors , guess what ? Hopwood takes a position with Norton
Norton had in the past employed Walter Moore and Arthur Carroll to do design work on the singles, especially the OHC ones but Moore got a better offer with NSU and left . Carroll was assisted by a bloke called Edgar Franks and I think that Hopwood and Franks came to an agreement over the work where Franks looked after the sloggers and hopwood rolled up his sleeves to play catch ups with all the other makers and get a twin motor in a test frame .The race stuff was controlled by Joe Craig and I mean controlled . 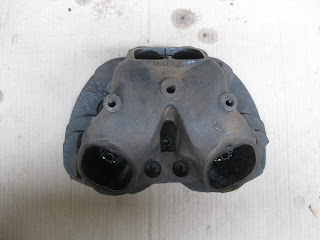 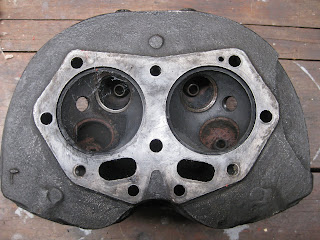 Firstly as a new blog I feel I need to explain the title, my first choice was Kickstart ,this was taken ,I thought of 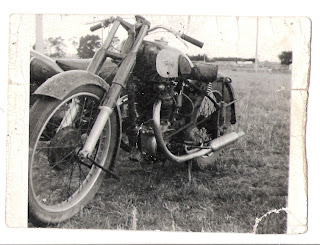 using Crankcase but then tried for 79x100 ,for those who haven't ever owned a Norton this is the bore and stroke of a number of Norton motors . These dimensions have been used on side valve overhead valve and overhead cam motors from back in the 20 s and well into the 50 s these numbers are synonymous with Nortons and are immediatly recognizable .
This blog is about motorcycles fixing them riding them watching them race ,its going to be about people too , motorcycle people ! I hope to do some stuff on individuals and their obsessions with the machines [ I know lots of them ] some stuff looking back on rides and stunts ,the heartbreak stories like stripping a gearbox four times before getting it right and there will be a big slant on restoration and mechanical stuff .I have received much encouragement from Jules [ tarsnakes ] to kickstart a blog and I committed to do some stuff in order to reciprocate with Colin DLR I feel like I am about to open up Pandora's box as I will need more time than I have got ,but what the hell here goes
So to start with ,the theme is Norton Dominator this will take some time to do justice to, the story starts around 1970 stalls for about 35 years and starts again I hope to carry the tale into the future by revisiting some of the places the bike has been and even to do it with the same mates and cousins that I rode with so many years ago, so I will post the earliest pic of this Domi here and take off from there .
Posted by Steve Kelly at 10:33 2 comments:

The law is an ass

If the law is an ass ,what is technology ? I have been experimenting with the blog and have been trying to correct some spelling mistakes ,but at this stage I either don't know how to edit the last post or it's not possible ! ,I may never know and because you can't ask a computer a question ,I am left hanging .Rather than advance with the story I am keen to conquer the format and get the "gadgets " in place before I invest too much time in the posts , I am making progress, like Scott of the Antartic only not as fast .Oh and a touch of humour to close on , What is the difference between the sales pitch of a car sales person and the sales pitch of a computer sales person ? ...................................
The car sales person knows when they are telling a lie .
PS is there a spell check on the blog posts ?
pps KS and GL rubber arrived from UK this morning now 100% ready for registration
ppps might I suggest technology is a Flea
Posted by Steve Kelly at 23:59 4 comments: 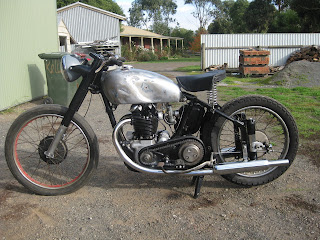