While investigating the myriad of machinery at the last Lake Goldsmith Steam and Traction Engine Rally I came across a display and running prototype of the Deane Spherical Rotary Valve fitted to a pre war Norton 16 H bottom end and installed in a ES2 garden gate frame .
I have included a pic of a newspaper article that explains a few of the design features , inventors being inventive have experimented with valve gear for sometime , I believe one motorcycle maker produced a sleeve valve motor with a liner inside the bore which moved up and down by way of a cam to get the ports to coincide ,we see side valve ,overhead valve ,inlet over exhaust [harley and land rover] over head camshaft  , DOHC , triple OHC [7R 3A AJS ] desmodronic valves and in two stroke motors  we have piston valve and  disc valve assisted by reeds and other stuff . 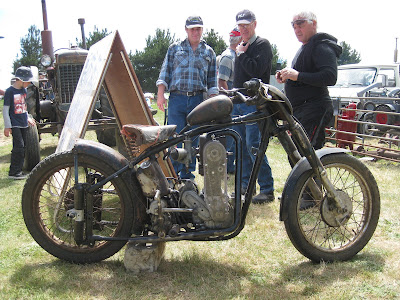 In the case of four stroke motors the idea is to reduce reciprocating weight in the valve train, as when anything moves in one direction and then has to be reversed it must come to a stop, and to get it moving again requires the greater energy investment [ greatest rate of change ]. Reduction of reciprocating weight is the object of the designers and also simplification of the engine will help in lots of ways these principles apply to suspension components too.Interesting to consider the design of the Wankel rotary and a design by the Australian Ralph Sarich
This motor has been in storage for  decades and been assembled into a frame so the general public can experience the creativity of the inventors , a quick look on google shows William Ronald Deane holds US patent 3730161       filed May 28    1971 . I seem to remember a rotary valve design fitted to another Norton shown in Roy Bacons book Norton Singles but this differs in that the Deane valve is a sphere fitted with rings that are pegged to prevent rotation and snap offs in the ports [ just like two strokes ]  I had a chat with the guys that did all the spanner work and they didn't think the motor produced any more power than the 16 H , it started first kick every time and sat and idled beautifully . The cylinder had been made from a compressor cylinder and the head is machined from solid, what kind of steel? I don't know , I think the text says the valve rotates at one quarter crank speed and the chain drive comes off the vestigial camshaft and th 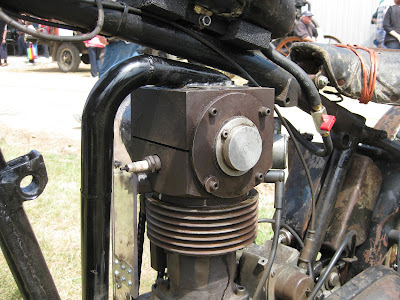 e last reduction would be on the two sprockets .
All in all this is an amazing exhibit and drew a lot of attention from the more technical minded punters at the rally, the inventors also made a head to suit a small honda single but no one seems to know where its gone,  perhaps Harold Holt had it under his arm when he swam off to that Russian sub or will it turn up on a lawn mower one day ? better check your shed !
Click on the print to blow it up big enough to read 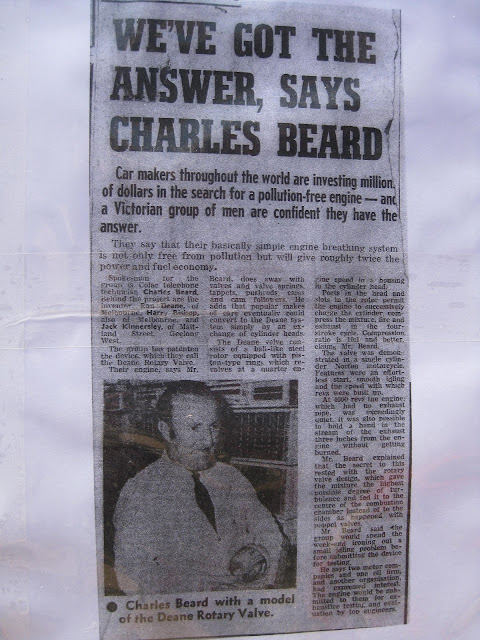 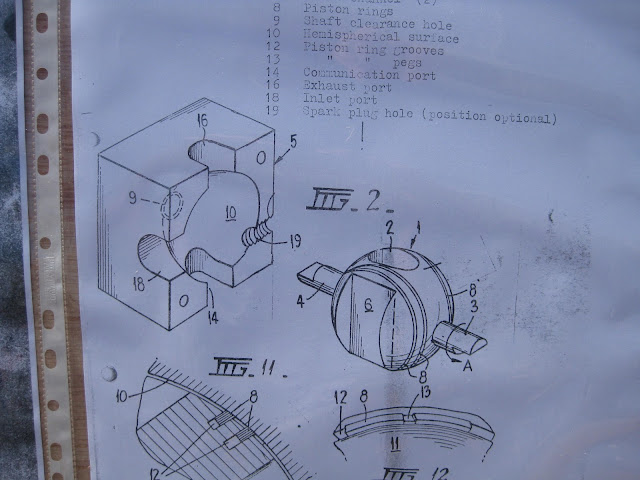