On a previous post I wrote about the good old days [ before Insurance Company Liability ] when the talent and imagination of the Swap Meet Junkie could be displayed at the meeting by way of a motorised shopping trollie / esky on wheels . Who needs a buggie ? you say,  well ,if you find a set of tyres for that Morris Minor or even a bottom end for a Beeza, you are gunna need a buggie of some sort to get the treasure back to the carpark, and that might be a long haul . You could make a couple of trips back to the ute but think of all the rare bits that have been snapped up by dealers and sent overseas while you dither ferrying the gold to the car , you need a buggie to suit you own collecting style and volume , where to start ? Hell we're gunna do what all the bike manufactures did before the design stage , we'll take a good look at whats out there , pick the best points, trash the bad bits, produce an economical prototype and do the on ground testing . John 'O' Groats to Lands End and 50 laps of Brooklands .That should do the trick , now check out the sly pics I took while working under cover at the last Bendigo Swap Meeting around 17 th November so this stuff is state of the art, none of your old technology here . Click on the pics to blow them up 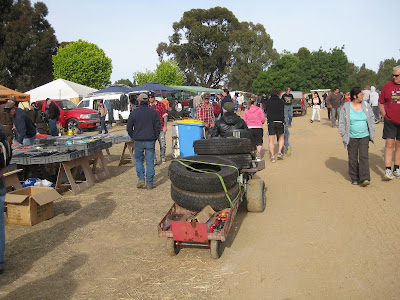 This was the only motorised cart I saw at Bendigo this year and the organisers would only have allowed it because the owner had one prosthetic leg . I can't remember the details of the prime mover but you can see the rear slicks and that the trailer is single axle , what a shame they banned these rigs as they contributed to the feel of the meeting so much . 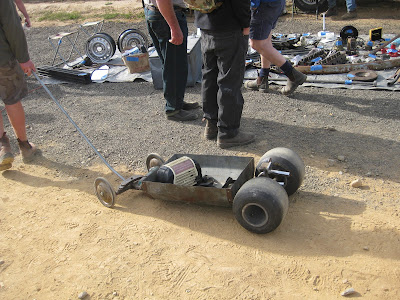 This guy's in a hurry , basic format is a dragster  typerfied by large slicks at rear, narrow disc wheels on the front , curious transverse front suspension, T model Ford  style and using non stressed mild steel body [ this could lead to failure at extreme speed ] His treasure is a 1950's style radio and some other junk I can't make out . 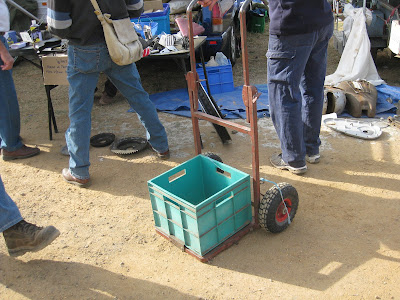 The most common type of buggie [bag trollie BT ], this one with folding frame finished in red oxide primer [rarely seen these days ] and inflateable tyres ,its got that home made look to it .Note the tub is the type bought at K mart or others ,as in the past the Sherrif  has been patroling the swaps policing the theft of milk crates. I'd like a commission for every record collection that is stored in a milk crate 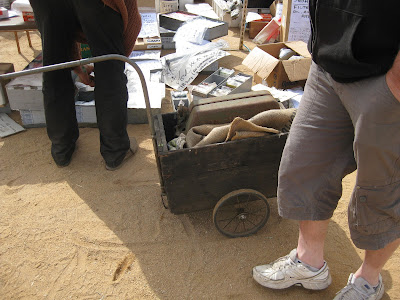 This is a blast from the past , not a purpose made ,swap meet buggie {SWB] at all  but is in fact a trailer designed to attach to the carrier of a push bike .
Main construction packing case tray, pram wheels on pram axle and 1/2 inch GWIP drawbar / handle note tray is a stressed member , this unit would be hard work in the loose granitic sand that had been spread over much of the grounds .Looks like he's scored a second WW gerry can and is hiding more stuff under a briquette bag ...
wonder what it is ? 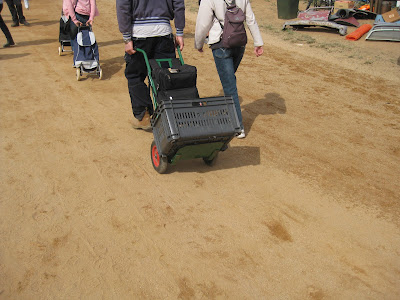 Another variation of the BT with a different tray , stackable with slots mouled into the sides , perhaps pinched from a greengrocer or a fishmonger .This guy has hooked his backpack on the SWB and is towing rather than pushing, a risky practice as treasure could be borrowed and not returned 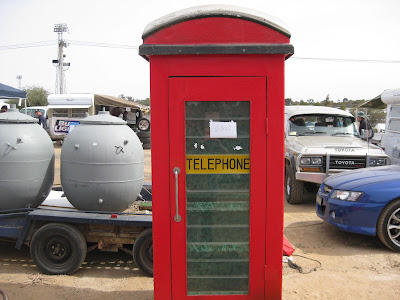 The white paper rectangle displays the price $ 2500.00
A Tardis [ T ] best way ever to get the parts home 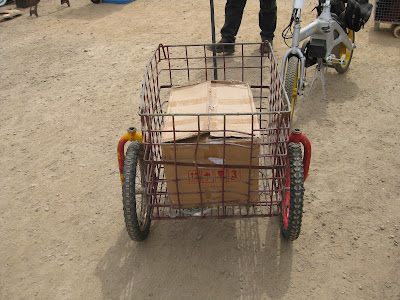 Recycling at its best ,the tips are full of bike parts and these big wheels are just the ticket for soft sand and pot holes 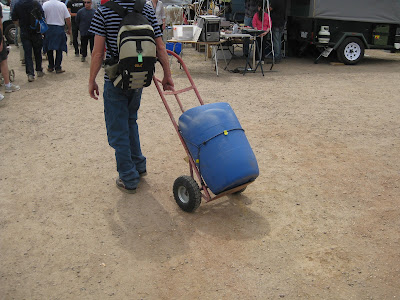 Another BT based cart using a cherry barrel for the tub QD provided by baler twine ligatures and occa strap hold down . This unit is eco friendly [ EF ]and will contain oil spills from gearboxes bottom ends and primary drives .
The writing is on the wall and soon all SWB's will have to be certified as EF 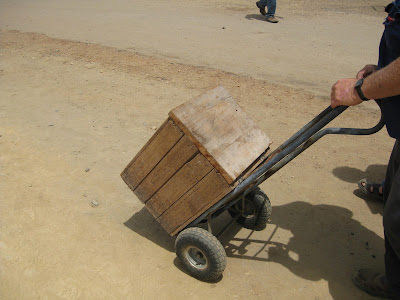 BT  fitted with sturdy home made tray looks like seat height , interesting box, nine out of ten blokes would have the tray side boards horizontal rather than vertical .This is the only SWB that had a lid . 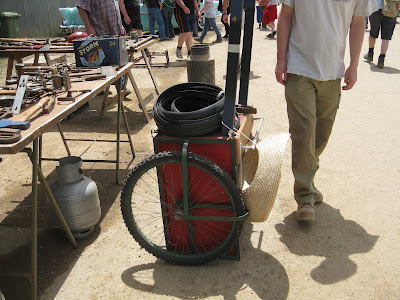 A veritable work of art.... rickshaw standing on rear end , this was parked and although I waited some time did not get a dynanic shot .Note push bike wheels and red and green trim this could indicate traditional Chinese colours or the with Christmas so close the colours of holly 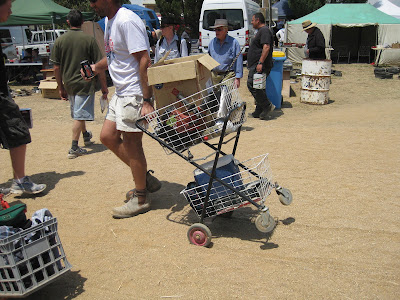 Thinking laterally , double decker stock crate  four wheel unit ,small esky on the bottom in the shade all the junk up top .Lets not kid ourselves this is a laundry cart and would never take the weight of say a GoldWing side cover ,this bloke needs to go back to the shed and take a good look at himself 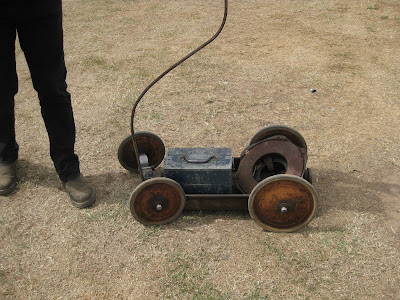 The low volume of this cart will limit this guy's shopping 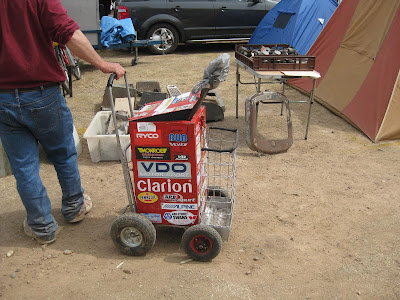 There you have it ! now you are armed with the design variation and lots background, so get out in that shed get down to the tip" keep your eyes wide the chance won't come again " grab the bits and get welding, Ballarat Swap last weekend in February and don't think you'll get a SWB up and running before Christmas .I want to see more original Stuff out there here's some pearls for free.
Stop lights  Radio  Sunshades   number plates    EPIRB   suspension  brakes