The Historic Motorcycle Racing Association of Victoria held the 31 st Southern Classic race on the weekend of 20 and 21 st of October at the State Motorcycle Complex , Broadford  Victoria  Australia .
This is a grass roots race meet which provides an entry point for those who love to ride and compete without needing a fortune behind you , you will however need a couple of mates a good toolkit and a bike trailer beside the obvious bike . The racers range from the slickest teams with immaculate bikes and gear to some of the roughest machines you have ever seen [one of which won its race ] being a classic meet ,almost all the riders were old enough to know better but shelved the common sense for the weekend , we did too .
It has become the habit of our rider group to attend this meeting as matter of great urgency , we all love the casual organisation of the meeting , for instance Jules picked up four free tickets at a hill climb two weeks earlier so it was free entry for us , parking is anywhere you like , food and drinks available ,camp on site , you can stand beside the starting line [two metres from the bikes ] and wander through the pits at will .I think the ticket are about ten dollars , program five they sell some quality shirts and stuff  and they have the club members on the counters giving a nice feel to the place .
The format for us getting up to Broadford is preceded by a series of text messages phone calls and even a conference call [ may need to take minutes next year ] eventually we decided I'd meet with Andy in Ballarat and both Commandos to meet with two ZX14 's at Ballan and all ride up together via Trentham , Woodend ,Lancefield , Kilmore , Broadford , and to the track . Perfect weather once we crossed the Great Divide and enjoyed mid twenties blue sky and had to use sunscreen . We move around and take a few pics always run into other blokes and have a brief catch up  and spend lots of time in the pits and of course watch the races
Late afternoon we jump back on the bikes and ride up the Hume Highway to our digs at Seymour ,a few beers a big steak [ 600 gms] a wander around the town and off to bed by midnight .
Sunday morning late rise and over to a small cafe for a big bacon and eggs breakfast and back home via a few new roads , one of which I liked very much , putting the question to the boys " why didn't we come up this way ?" they answered..... " we did " .. 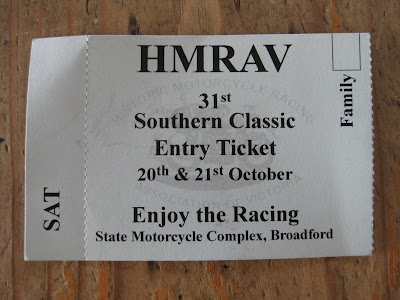 The weekend went off well , I suppose the key ingredients are the company the weather the event , probably really is ,only the company , but I managed to plan the fuel stops better for the thirsty Commando with the 11 litre tank and we didn't have rain or even wet roads , just really want to do it all again .

Here's the pics , click on them to blow them up
Also see Tarsnakes report on
www.tarsnakes.com.au 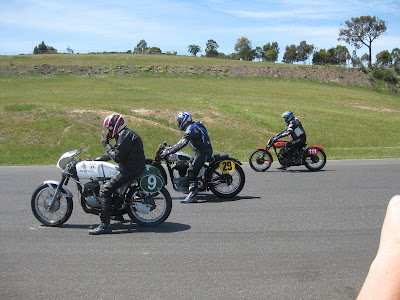 The starting line, I have a close up of the motor, number 29 the others are a Bultaco and a Indian twin , quite a lot of these racing some with four valve heads exposed rockers , like the early Rudges . 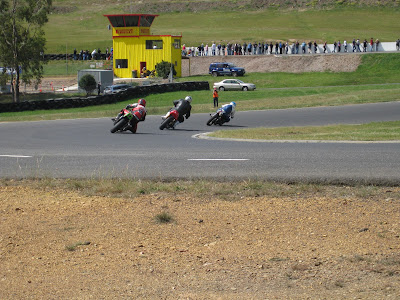 Nasty little right hander , always hated right handed bends, the line of punters in the background are at the starting line, the noise is deafening on take off clouds of blue smoke from the two strokes , and from some of the others too ! 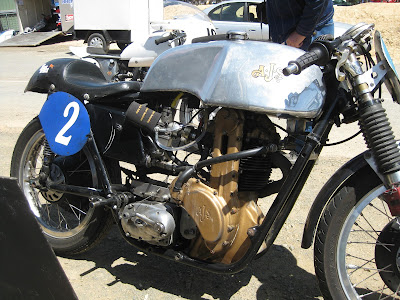 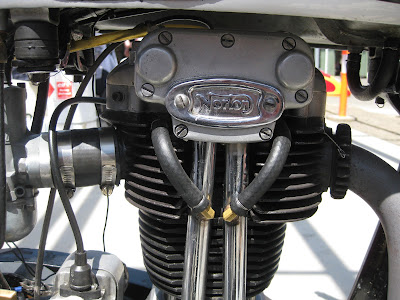 Close up of motor, number 29  a rigid girder pre war  ES2 fitted in a cradle frame .I had a bit of a chat with the owner / rider and was surprised when he said that he is running a Rudge steel crank with a remade barrel to give the motor square diementions or close to .
Also note drain tubes from the valve wells ,34 mm Concentric carbi , and not shown third order lever to depress the clutch like a 20 s Ajay instead of the Norton spiral arrangement .I watched this bike race and was surpised how well it went , success is the sum of rider and bike .well done ! 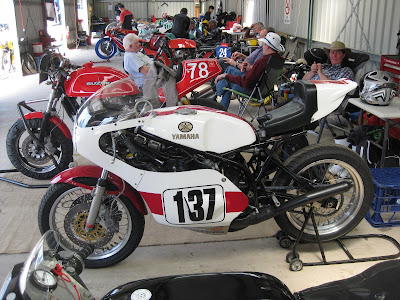 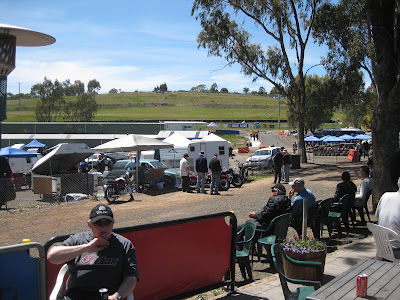 JP in foreground with Coke 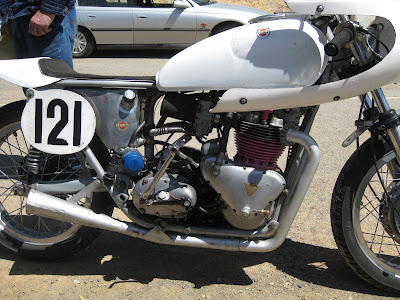 Triumph ,this bike won in at least one race 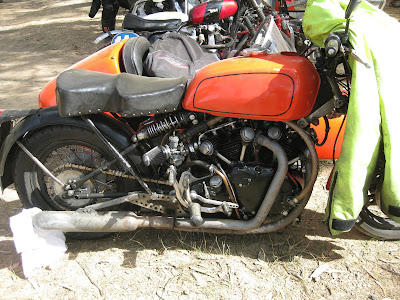 What can I say that hasn't been said before some times the parking area is more interesting than the pits and more creative ! 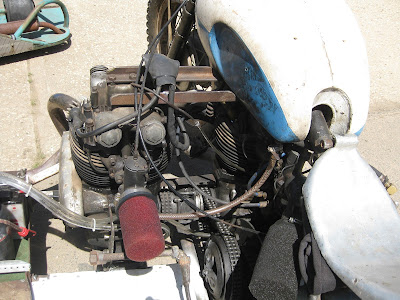 Dual twin Triumph unit , didn't hear this run or see it race but would imagine it would have a bit of go .
Note the left engine must have had its rotation reversed  with implications to the cams  ignition and the oil pump 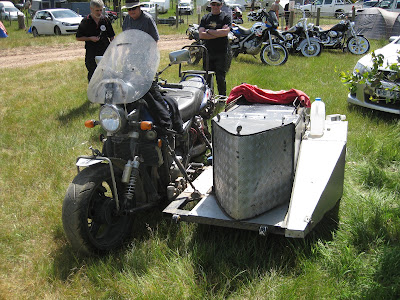 JP entered into negotiations to swap his ZX14 for this unit but the owner wanted too much !
Just fancy how this would cut through to air like a knife with that aerodynamic chair .
The only machine I have seen that rivals this is a R series BMW in the Birdwood Museum SA set up for touring 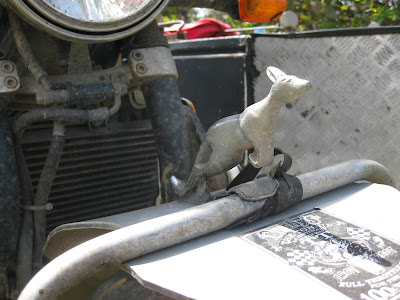 Nice emblem on the front guard, I must keep my eye out for something for the Commando